About 20 years ago, after having just finished their university studies, three friends started travelling around Crete and exploring its mountain tops and underground caves. That was us and we soon realised that the myths and the history of the places we visited are a vital part of what we experience today. The stage had been set and we were very keen to discover more.

Based on our academic backgrounds (archeology, regional planning, speleology) we gathered experiences and put them in order. Then we started sharing them with friends and acquaintances.

It was these friends and their enthusiastic reactions that got us going and finally made us start organizing all this material on a more systematic basis. That’s how our personal experiences turned into exploratory and thematic tours. In the end, these friends are what PETASSOS is all about, since they were the ones who breathed life into our vision and made it happen.

Experts in all fields of out-of-the-beaten-track tourism, in environmental and human sciences, came together at PETASSOS and got to work. And their enthusiasm gives this work a festive air. 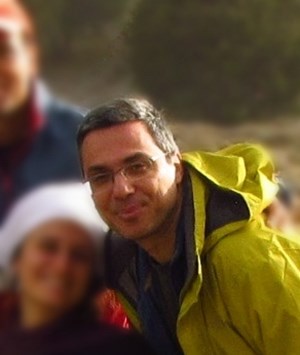 Archaeologist specialized in East Mediterranean prehistory. His research is focused on human – natural environment dynamic relation and on the construction of cultural landscapes, especially in exceptional locations, such as subaquatic - seashore, or cave and mountain-ridge cultural assemblages. 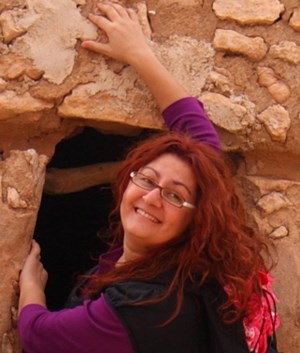 Ever since she was a young girl, Emmanouela, an architectural designer and a soul full of wanderlust, wanted to learn about the planet, its countries and, above all, the people living there. Twenty years ago, she began travelling abroad, while also visiting Crete and the rest of Greece, both above and under the ground. Her participation in speleology seminars in 2000 and in mountain treks since 1995 – both with clubs and alone – taught her how to move safely on mountains and watch out not just for herself but also for her fellow trekkers. She favours small travelling groups and is a big believer of direct contact and substantial acquaintances in small groups, creating teams and friendships that are worth holding on to after the trek is over. For Emmanouela, one thing is for sure: you won't be seeking new paths, but you will walk along familiar ones that will reveal to you a new home. 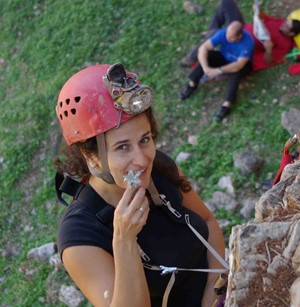 Chryssa specializes in local and regional development issues and has been active for over 15 years in the area of empowerment of local communities within the context of endogenous development and local management. Since 1999, she is actively involved in caving as a member of the Speleological Association of Crete.  She has participated in many expeditions for the exploration and recording of caves and other karst formations, as well as in studies and books aiming at promoting the study of the caves of Crete while she has also written many travel guides for the island of Crete. 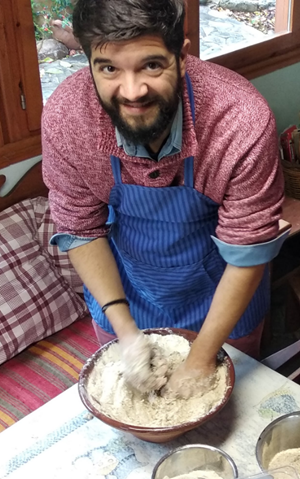 George is an Anthropologist specializing in the Culinary Culture of Crete. He holds a PhD in Anthropology with research on food consumption patterns with a comparative research in the European Food Markets of Greece and Slovenia. He has been involved in the travel industry the past three years and has dedicated himself in bringing Crete in the attention of the world of travel, outside the mass tourism models, showcasing it as a unique and special destination. His main effort is to link cultures through the awakening of the senses, with taste being in the starring role. 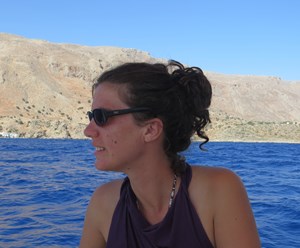 Penelope Gini is working since 2007 guiding visitors during their adventure of discovering new places. What’s important to her is to give a meaning to the journey as an interpreter-guide of cultural and environmental heritage. Through her studies in communication and media and her training course in dry stone circuits she tries to approach nature and culture from different perspectives. Her interests are centered around the concept of travel and what does this involve: the journey of thought, of people and of nature through story telling. This is what she wants to share, also being one of the travel guides of onfoot.gr.

GIANNA Askianaki Political Sciences / In charge of the German market 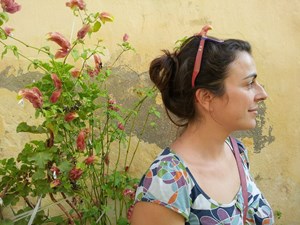 Gianna studied political science in Greece and museology - ethnology in Germany. The path of cultural tourism brought her back to her place, to work as a tour guide for small groups. She loves the different cultures, traditions and customs of each country and she is open to anything new. In Petassos she is dedicated to make every trip an unforgettable experience. 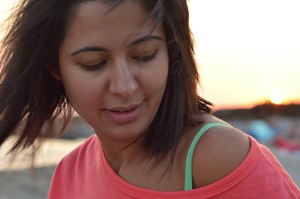 Marina is a German language teacher and specialist. Her passion for travels and excursions and her desire to meet new people and cultures have turned her into a passionate explorer of the world!

Her greatest love is her homeland, Crete, which she explores without missing any opportunity for a getaway or an excursion to the mountain and the sea! Every steep coast, every traditional village, every place of special fauna and flora is always on the top of her preference list! It doesn't surprise us that her friends always ask her advice and proposals when it comes to the organization of any expedition! 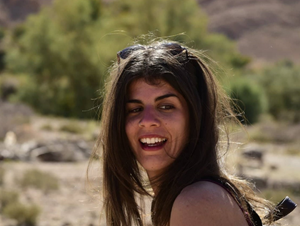 Maria Arkouli is a professional translator, graduate of the Department of Foreign Languages, Translation and Interpreting of the Ionian University. She specializes in translation, editing and creative writing. Although born and raised in Athens, after finishing her studies, her love for life in the province and the northern wind have led her to Crete, were she discovered a fascinating place and a new home.

As a translator, she is the bridge behind the words of cultures, and as a traveller or a hostess, she likes being united and uniting people.  Her love for languages, nature, Crete and travelling has brought her in the unique team of Petassos. She is excited about anything new and is passionate about all types of journeys, even those that you might get lost in, as she likes finding her way. 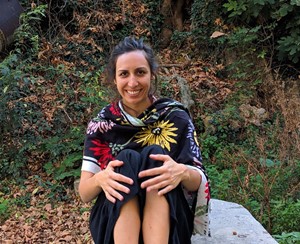 Christina studied Business Administration at the University of Piraeus but her passion for travels led her to get involved with the travel industry.

Seeking to experience the authentic travel, she avoids mass tourism and  stays off the beaten path. Her desire to help people familiarize themselves with the local customs of their destination led to her cooperation with Petassos team and settling in this fascinating place that is Crete.

Every time she prepares her backpack for a new journey, the ancient saying comes to her thoughts: Wherever you go, go with all your heart. 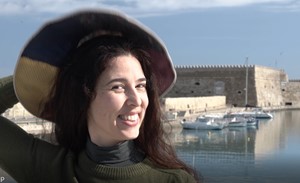 Nektaria Mavroudi is an archaeologist, now a PhD candidate of Prehistoric Archaeology. She has participated in numerous Greek and international field projects. Her interests include landscape archaeology and Bronze Age architecture, the anthropology of gender and initiation practices concerning different life cycles in prehistoric Aegean. 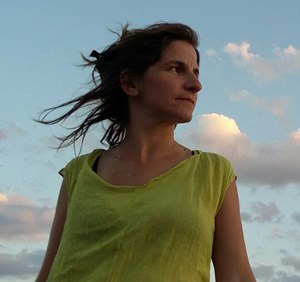 Marianna is an archaeologist, who has chosen to live in a small village in Crete as a member of the local community, an amateur farmer and an explorer of the surrounding historical landscape. She has years of experience in archaeological survey, excavation and restoration of monuments. She is scientifically focused on medieval topography, architecture and wall paintings' ontology. She is specialized in cultural heritage management and thus, she loves to share her knowledge about the history of the land and the people of Crete. 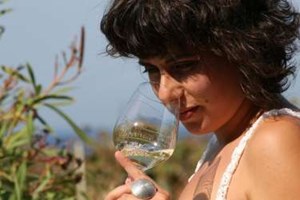 Stella studied Food Engineering in the Agricultural University of Athens, and then Oenology in the University of Bordeaux. Charmed by the wine world she travelled and worked in different viticultural areas of the world. After several years, she came back to where everything began…in Crete. Since 2014 she has her own small tasting room in the middle of the most important viticultural area of Heraklion, where she organizes wine tastings and seminars and transmits her passion to wine lovers.

Ioannis searches continuously the meaning of life and tries hard not to be sucked by the typical Western lifestyle. Among other things, he loves learning anything new, doubting about everything, travelling to explore nature and other civilizations, playing music, singing, dancing, doing hikes, descending caves, discussing about life, cultivating, hosting internationals, showing hidden aspects of Crete to friends and collecting - processing food from the wild. In 2013, he gave up his previous life as a programmer, suggesting that life is too short to spend it in front of a computer screen and since then, he tries to get involved into things he finds interesting, meaningful, not profit-oriented and to sum up, things with a good purpose. He is very motivated to discuss about agroecology and natural farming practices and their impact in humans and nature. History and archaeology was an old passion of him, so in 2014 he enrolled once again in a university to fulfil a dream forgotten in the closet of time. 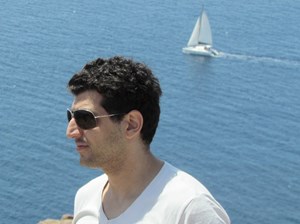 Spiros has finished Geological studies at the University of Athens and he has been specialized in Geopark Management & Geotourism during his MSc course in the UK. He has great expertise in Geographical Information Systems (G.I.S.) as well as in field surveys and cartography. He has drew a significant number of print and digital thematic maps and he recently established his own publish firm which focuses in designing and publishing maps for geotourism, ecotourism and other thematic kinds of tourism. He has also mapped numerous trekking and bicycle trails and he has a great experience in organizing thematic trips and excursions. He obsessively loves the Greek nature as well as the blue crystal seas. 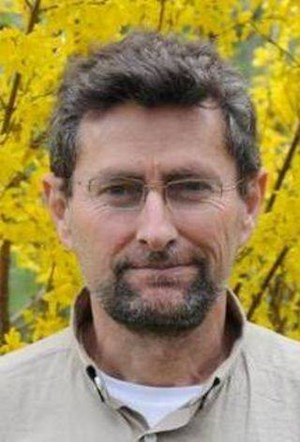 Manolis, is an Agronomy school graduate, specialized in Botany, with special interest in the flora of Crete. He is currently working at the Botany department of the Natural History Museum of Crete. He is a member of the Heraklion Mountaineering Club and has many years’ experience in organizing excursions in nature and in guiding nature-lovers in the paths of Crete. 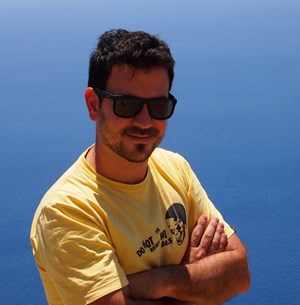 Christos Diamantopoulos is a chemist and an expert on food technology. In the last few years he has been working on Crete as an advisor on developing food quality and security management systems. Through his professional activities he has discovered the nutritional treasures and wide variety of Cretan products as well as the advantages of the Cretan dietary customs and cuisine. In cooperation with Petassos, he wants to share with travelers his knowledge of and love for the Cretan products as well as for the island’s food history from the past to the present times. 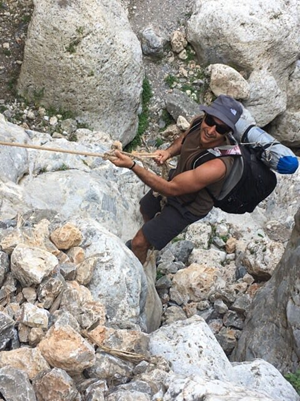 His passion for nature led him into all kinds of excursions within and outside Crete. He deals with the study of aromatic plants and herbs, which he also cultivates. His aim is to ensure that the experiences, knowledge and sensitivities of the people of Petassos will be diffused in the most efficient and safe way. 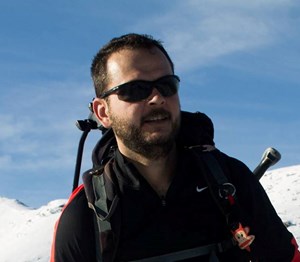 Christophoros studied computer network technology, but his love for nature and the mountains prevailed. In recent years, he has been involved in activities such as mountaineering, speleology, gorge crossing techniques, as well as the management of the climbers’ shelter on the White Mountains. He has successfully completed numerous courses organized by Mountaineering and Speleology Federations and has participated in numerous expeditions in Greece and abroad. 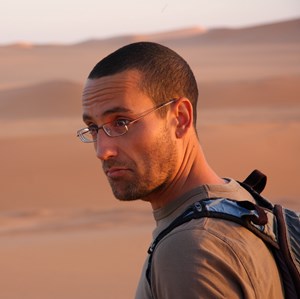 Antonis, an agronomist by profession, has been involved in nature and extreme sports since he was a student. He has attended and succeded in the classes of all schools of these fields. So, he knows how to correctly and safely angege in mountaineering, sailing, horse riding, speleology, canyonin, sea kayaking, et mountain biking. Since the age of 12, he has been travelling to Africa, South America, Asia and Europe, in order to learn and acquire experiences, live and participate in the life of other people and other cultures. Over time, thanks to these interests, he has gained the experience and the knowldege that he shares with us today.